Poems About Translation 24: The Translators, by George Szirtes

Recently arrived in my postbox, a very interesting-looking collection of essays on literary translation, including articles about the German audiobook of Achebe's Things Fall Apart; Duncan Large on philosopher-translators; Holocaust testimony in translation; on the Polish translation of Tutuola's Palm-Wine Drinkard; and many more. 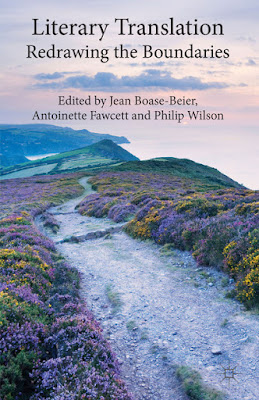 I was very pleased to see a Poem About Translation (it's been a while), namely 'The Translators' by UEA's own George Szirtes, originally published in The Rialto in 2009. You can find the complete poem here on the Poetry Magazines site.

I'll leave Dr Szirtes to comment on the poem himself:

And while we're at it, here is a wonderful 2005 essay entitled 'Foreign Laughter' (from the Dublin Review, in honour of my quick trip to Dublin this weekend) by Szirtes on translating Hungarian literature.
Posted by sunny south coast at 16:57 No comments:

I really enjoyed this post on Luke McKernan's excellent Picturegoing blog, which quotes an account by the American journalist Robert Joseph Casey (1890-1962) of going to the cinema in the town of Ettleburck in Luxembourg shortly after the First World War:


I suspected from the first that “On the Line of the Four,” however much it might promise as a war picture, was very likely our old friend and neighbor “The Sign of the Four,” and so it was.

The original nationality of the piece was a doubtful matter. There was hardly enough of it left to give one a consecutive idea of the plot, and the French captions were so worn that little was to be gained from them. It may have been an American film of that era when there were no stars. At any rate, no latter-day favorites appeared in it. It may have been English. Certain elements in the “locations” suggested England forcibly. But whatever its pedigree, its days of usefulness were nearly done.

The Anglo Saxons in the house, to whom the name Sherlock Holmes was a sufficient guaranty of story action and plot, could not get very far with the titles in French. Those who had mastered enough of the language to surmount this difficulty were certain to become hopelessly muddled in the aimless mixing of scenes that seemed to be the result of many years of “cut and patch.”

This issue of the difficulty of identifying a silent film's origin echoes the story of the 'O'Kalem collection', a DVD release of the surviving films shot by the Kalem film company (in its various incarnations) in Ireland between 1910 and 1915. The fact that two of the films, The Lad from Old Ireland (1910) and His Mother (1912), only survived in German and Dutch versions respectively, 'delayed their identification by scholars over the years', as we are told in the very informative booklet accompanying the DVD.
Posted by sunny south coast at 16:33 No comments:

I thoroughly enjoyed Wednesday evening at the Lansdown pub in Bristol showing a combined Georgian/Irish programme of films about subsistence farming (if you squint) at the very kind invitation of the wonderful Bristol Silents film club. The programme featured two of the 'O'Kalem' films shot in Ireland in the 1910s, and Mikhail Katatozov's Salt for Svanetia which I had seen last year at the seventyseven film club (Bristol is good at film clubs).

The Lad from Old Ireland can be seen here:

A clip from Salt for Svanetia can be seen here

Its director was supposed to be making a piece of agitprop about the building of Soviet infrastructure but mostly forgets this (until the startling final few minutes of the film) in favour of watching the play of light and shade and texture.

A final snippet from this event: while I was watching the O'Kalems it was difficult not to be reminded of later films set in Ireland (like Song o' my Heart (Borzage, 1930), starring John McCormack), as well as of later emigrant narratives like Das Lockende Ziel (Reichmann, 1930). Links are made by some scholars between The Lad from Old Ireland and John Ford's 1952 classic The Quiet Man.

I was particularly struck by the shot in The Lad from Old Ireland where Terry, played by Sidney Olcott, is bidding farewell to his sweetheart Aileene, played by Gene Gauntier. The scene takes place against the backdrop of a cottage, a field, a drystone wall: 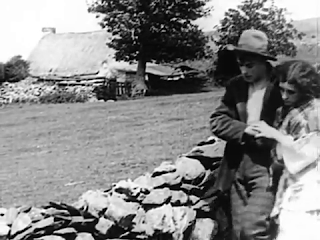 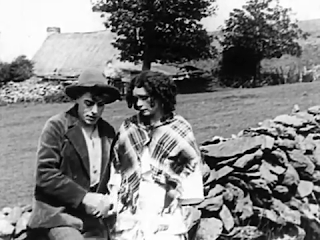 Compare this sequence from Song o' my Heart where Fergus, played by John Garrick, bids farewell to Eileen (coincidence?), played by Maureen O'Sullivan. The scene takes place against the backdrop of a cottage, a field, a drystone wall: 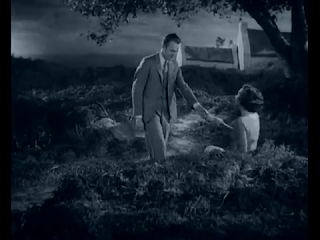 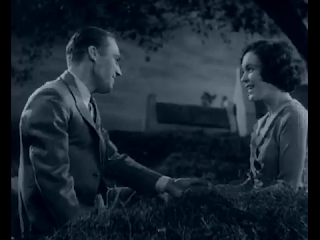 In fact they liked this so much they shot it twice! This is one of the films for which an International Sound version exists as well as the domestic release version - perhaps more on that in another post.

Is this just a really well-worn shot setup? Comments welcome on any other emigrants-bidding-farewell-to-sweethearts-in-front-of-drystone-wall sequences out there...
Posted by sunny south coast at 04:13 No comments:

OK, silent film translation time. I just came across two different language versions of Kid Speed (Semon, 1924), a comedy short featuring one Oliver N. Hardy. One version is in English; the other is in Italian, from an off-air recording from RAI television.

The English version can be found here:


The original YT poster dates this broadcast to the 1970s: 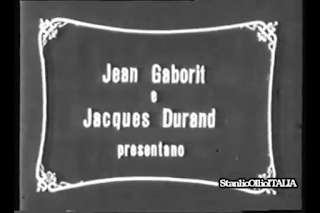 The English version runs slightly over eighteen minutes; the Italian clip less than fourteen, but it's typical of these broadcast versions to be quite cut about. What's interesting is to look at which bits have been maintained and which have been lost. The English-language version has a lot of verbal as well as visual humour. The scene is set in rhyme: 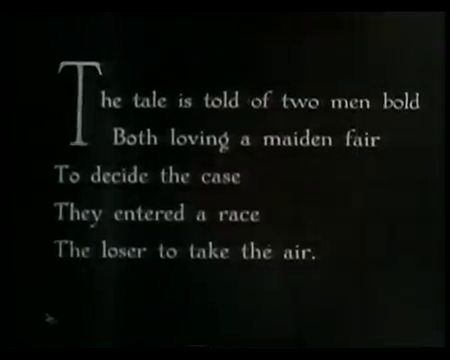 There are some quite marked shifts in register between the titles: 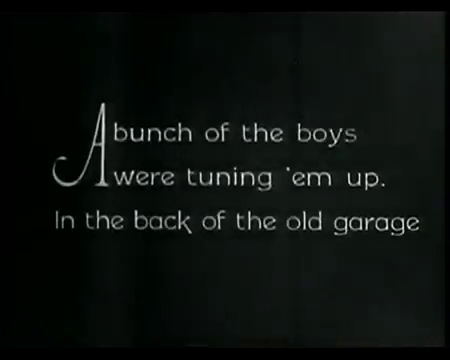 (I can't work out why the two different typefaces and layouts.)
Some of the titles introduce the characters and the actors who play them: 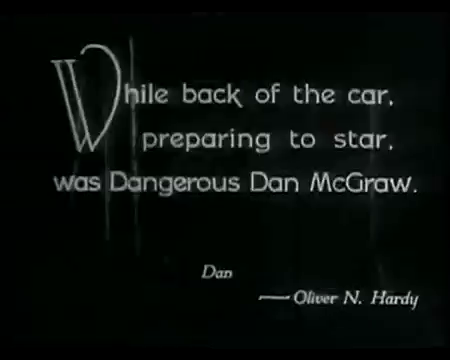 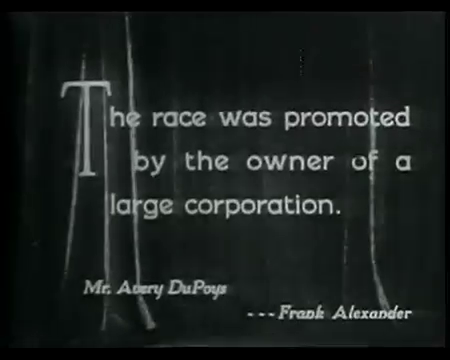 (The writer seems temporarily to have run out of rhymes here.) 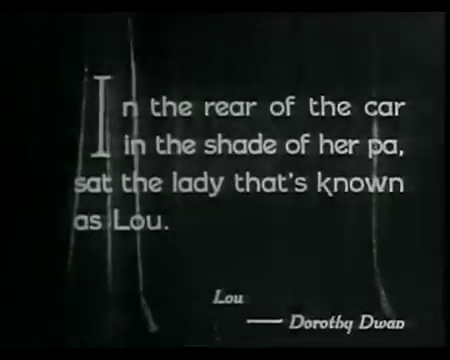 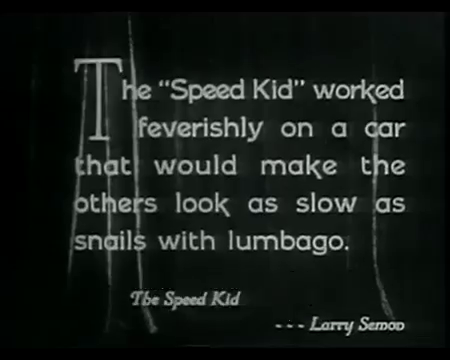 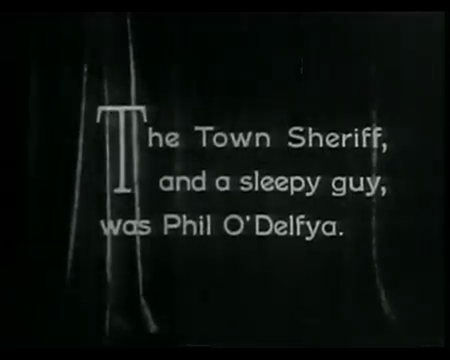 (I am embarrassed to say that the penny took a few minutes to drop with 'Phil O'Delfya'.) 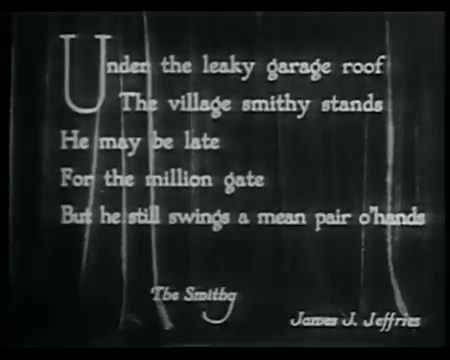 (btw any readers know what the 'million gate' is?)

The Italian credits don't introduce the characters like this, and the full cast list in the opening credits is missing too. Instead they give us an opening credit for Semon, and one for Hardy and a 'Patty Alexander': 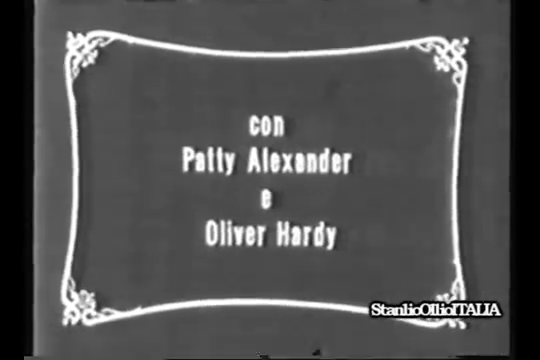 This is a bit mystifying, since the only actress in the film is Dorothy Dwan, and on checking, she doesn't seem to have masqueraded at any point as Patty Alexander, though she did start out in life as Dorothy Illgenfritz. There is a Frank Alexander, but...? Mystery unresolved. (For more on mysteriously differing character names in Italian film versions, see old post 'Who is Fred?').

The Italian clip blithely ignores all the scene-setting and verbal dexterity of the original. It has many fewer titles - is, in fact, positively laconic: 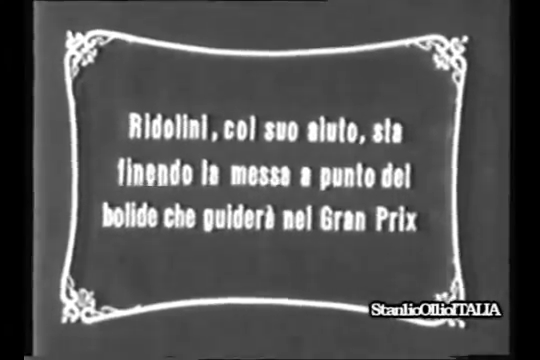 [Ridolini, with his help, is fine-tuning the meteor/vehicle he will drive in the Grand Prix.] (I'm not sure who 'suo' refers to here.) 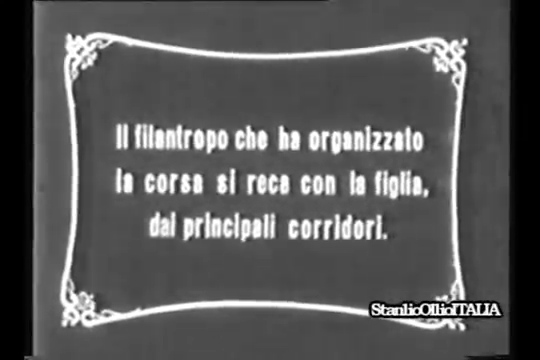 [The philanthropist who organised the race pays a visit with his daughter to the main contestants.] 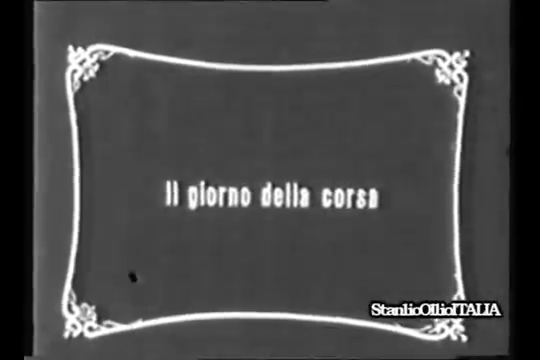 [The day of the race.] Note that this title corresponds to the following title in English: 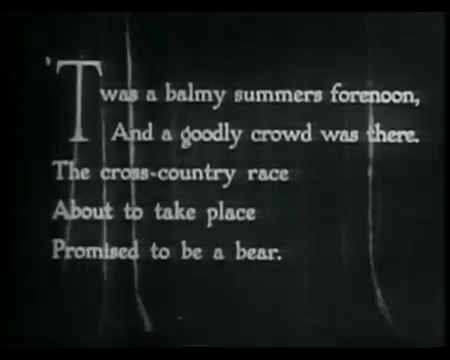 The Speed Kid (Semon) and Dan McGraw (Hardy) are rivals for the affections of Avery DuPoys' daughter Lou, played by Dorothy Dwan. Her father promises that whoever wins the race can date her: 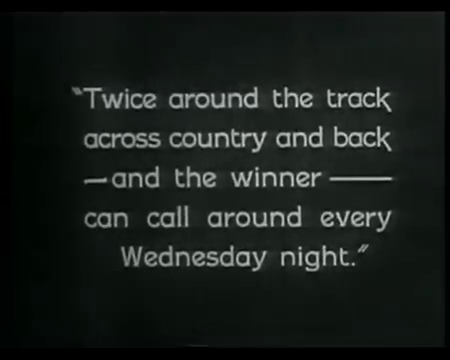 Dan McGraw gets very excited about this, and tries to get his goons to sabotage his rival: 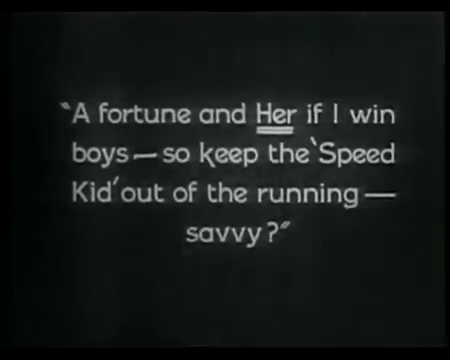 But in Italian, he only seems to be interested in the race: 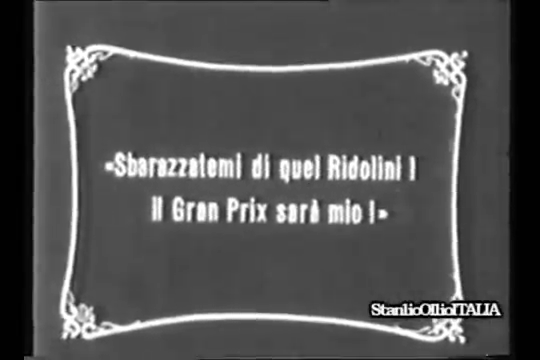 [Get rid of that Ridolini! The Grand Prix will be mine!]

The clips raise lots of questions. Are these two versions in themselves complete, or have they lost other bits along the way? Are these Italian titles the earliest available titles, or were there at any point earlier, perhaps more fully translated titles? Can we in any sensible way consider these two films as original and translation?

It's clear that even if silent film *can* lay claim to being easy to translate because the titles in the target language can just be refilmed and substituted, it doesn't mean that silent film *is* translated in so straightforward a manner. The whole texture of the film has changed. Taking out the wordy English titles changes the nature of the comedy, rebalancing the film in favour of the slapstick. Paratextually, it's reframed as a nostalgic pleasure, rather than for a contemporary audience. And the Italian titles are poorer not just semantically, but aesthetically; the two typefaces used in the original (for reasons which aren't clear to me, since they don't seem to correspond to any distinction between, say, narrative and dialogue titles) are reduced to one very functional one. And that's of course without even considering all the other ways in which the film could have been recut, which is beyond the scope of this little post.

The whole question of what actually constitutes 'part of the film' for the purposes of translation is at issue. But more on the (para)textual status of intertitles in a future post. 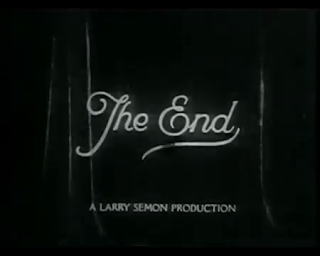 Posted by sunny south coast at 15:41 No comments:

Coming up, for readers within reach of Sarajevo, the next event from the IATIS (International Association for Translation and Intercultural Studies) Training Committee, with Professor Dorothy Kenny of Dublin City University: 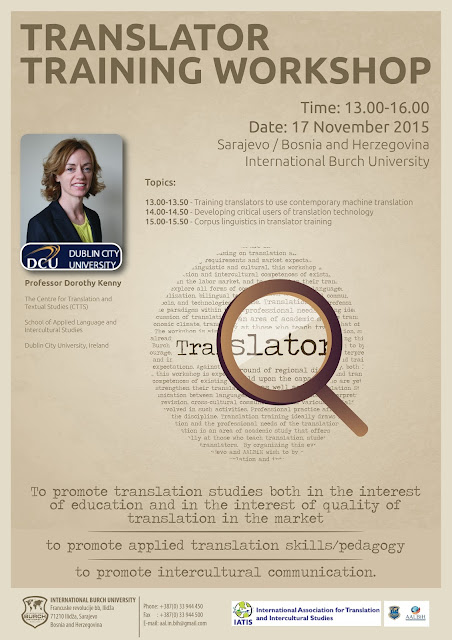 Posted by sunny south coast at 14:58 No comments: