This event is being organised by one of our graduate students, and there are still a few places left at time of writing. The event is free but registration is required. 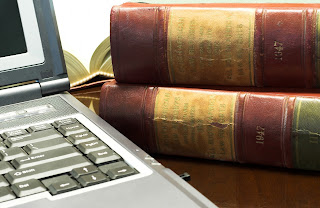 This workshop is open to postgraduate students and staff working in the humanities, in particular in literary and language studies, including translation. The workshop is free.
It requires no previous experience of corpus linguistics software, and will be led by Professor Jan Christoph Meister (Hamburg), who heads the team which has developed the free, web-based software which will be used, known as CATMA (Computer Aided Textual Markup and Analysis).

CATMA is a practical and intuitive tool for literary scholars, students and other parties with an interest in text analysis and literary research. In contrast to most corpus linguistics software, the program combines standard features such as wordlists and collocation searches with the ability to mark up texts in a user-defined way, prior to analysing them quantitatively. It is also designed to facilitate collaborative work on literary texts and allows for the easy sharing of data and metadata. It can be used with individual texts or corpora of multiple texts, in a wide variety of languages.

The philosophy underlying its development is that computers can now be used to complement the traditional close reading of literary texts with quantitative analysis of various narrative, stylistic and linguistic features to gain a deeper understanding of texts and to develop and test various interpretations of them. Examples of the kinds of use to which CATMA can be put include:

The workshop will provide a hands-on introduction to the software and its capabilities, and there will opportunities for you to discuss how you might use it in your own research.

Tea, coffee and a light buffet lunch will be provided. Participants are responsible for their own travel costs.

The workshop will be limited to 20 people. If you wish to book a place, or have any questions, please contact roy.youdale[at]bristol.ac.uk.
Posted by sunny south coast at 10:49 No comments:

Translation workshops at U. of East Anglia, Norwich, autumn 2015

I've just seen the lineup of literary translation workshops taking place this autumn as part of the MA programmes in translation at UEA, and they look great. Lovely to see that first up is the wonderful Rosalind Harvey, Bristol denizen and literary translation cheerleader extraordinaire - an excellent speaker on this topic, and warmly recommended.

Translation workshops take place as follows unless otherwise noted: on Wednesday's in C. Hall 0.13 and Thursdays in J.S.C. 1.02 between 5 and 7 pm. Workshops are organised jointly by the School of Literature, Drama and Creative Writing and the School of Politics, Philosophy and Language. These workshops are free and open to the public. 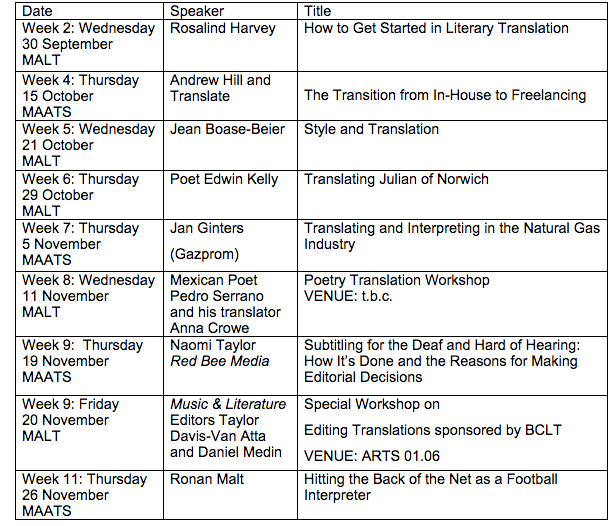 (Protip: My memory of UEA campus is that you need plenty of time to work out where you are going.)

Posted by sunny south coast at 12:23 No comments: 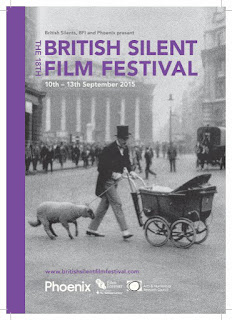 I've been blown away by the experience of attending the British Silent Film Festival. It's the first time I've been at the Festival, though it has a long and distinguished history (it's in its eighteenth year). This year's Festival is at the wonderful Phoenix cinema and cultural centre in Leicester (a most sensible place, where you can even buy a flat in the same building for easier cinemagoing). It was lovely to meet up again with some well-known faces from the Splendid Innovations conference too.

Other people more knowledgeable than I am are blogging the Festival (see e.g. Silent London) and so I will concentrate on things translationy (though I would love to rave about the wonderful sailing footage on Windjammer, or the brilliant slapstick of Buston Keaton in Steamboat Bill, or, or....).

A number of films were screened at the Festival in their original languages with a spoken translation. This worked really well and it was interesting how the different film explainers gave the films quite a different tone. Neil Brand did great accents for the Dutch titles on the only available print of The Man from Home (Fitzmaurice, 1922), which helped give an extra touch of entertainment to an otherwise ho-hum film. Bryony Dixon's narration added ironical notes to the very good Swedish film Den Starkaste [The Strongest] (Sjöberg & Lindblom, 1929), a story of romantic rivalry between two ship's marksmen hunting for seal and bear in the Arctic.

A gentleman whose name I unfortunately didn't find out heroically improvised a spoken narration to Tourjansky's Michel Strogoff (1926) - a task made extremely difficult both by the film's titles and inserts (often very wordy, rather cramped, lots of handwriting, varying formatting, and not long enough on screen) and by the sheer length of the film (nearly three hours). It gave a whole new tone to the film and made me very aware of every title and text insert - and nearly distracted from the amazingly beaux yeux of Ivan Mosjoukine: 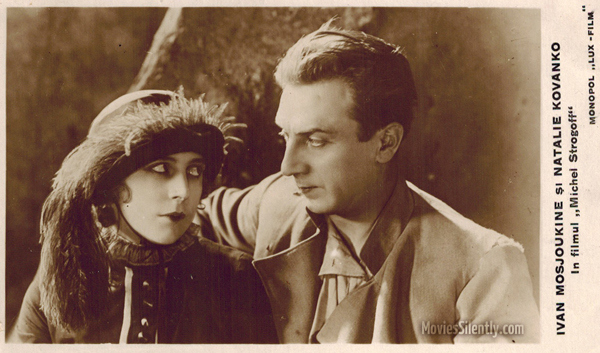 Image borrowed from this excellent review of Michel Strogoff at Moviessilently, hoping the owner will not mind.

For more on the skill and resourcefulness needed for festival film interpreting, see this article on film festival interpreting in the USSR by Elena Razlogova (subscription only). Props also to John Sweeney for his thrilling accompaniment to the film (though in fairness, all the musicians I heard were marvellous).

Two films were screened for which Alfred Hitchcock designed the titles, way back in the day when he worked for Famous Players-Lasky British. One was The Man from Home; only one print survives, with Dutch titles, mentioned above. The other was Three Live Ghosts (also Fitzmaurice, 1922) which was thought lost, as Charles Barr fascinatingly recounted, until a truncated print was found in Russia. The image on the front of the Festival brochure above is from this film. This was for me the real treasure of the Festival because of the way it had been cut, recut, added to and adapted.

Translation Studies scholars have tended to follow pioneer scholars such as Jan Ivarsson on the relative simplicity of translating silent film: 'the original titles were removed, translated, filmed, and re-inserted'. I imagine that in most cases, this was quite true. But someone working from a more Descriptive-Translation-Studies point of view might ask: OK, it was potentially easy to translate intertitles, but were silent films, in practice, so straightforwardly translated? There's plenty of evidence to suggest that intertitles were subject to the same kinds of 'deforming tendencies' (Berman's phrase) as any other translation. There's also plenty of evidence that silent films were routinely recut as well as retitled (see my previous post on Adrian Brunel's work editing silent films for import to the UK, or those juxtaposed versions of the same Chaplin film in English and Russian that I would look up on Youtube if I wasn't currently on a train...). Intertitles also pose other problems with layout, typeface, production values, etc., and technical/material problems which affect their preservation - see Enno Patalas, for instance, on Nosferatu (paywalled).

I would argue that we shouldn't see this editing work as external to the translation of the film; editing, retitling, adjusting for the target market are surely all part of the same process. Admittedly, Three Live Ghosts seems like a spectacular case, including, as Charles Barr described to us yesterday, the changing of characters' names, backstories and motivations, as well as the likely addition of footage not belonging to the original film. I look forward some day to reading a full account of this particularly intriguing silent film translation.
Posted by sunny south coast at 14:58 No comments:

An upcoming event which may be of interest to readers: 'Researching Collaborative Translation: An International Symposium' at Hong Kong Baptist University, 7-8 April 2016. Registration opens on 1 October 2015. The event is organised in collaboration with ARTIS (Advancing Research in Translation and Interpreting Studies). 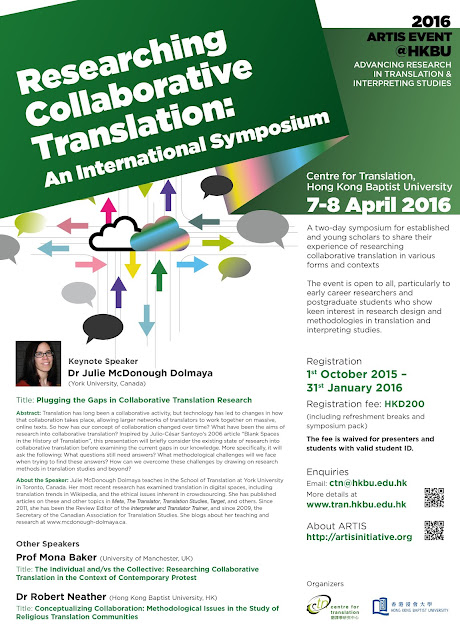 Posted by sunny south coast at 05:49 No comments:

ARTIS (Advancing Research in Translation and Interpreting Studies) developed out of the TRSS (Translation Research Summer School), based in the UK and latterly also in Hong Kong, co-organised by Edinburgh, Manchester, UCL and Hong Kong Baptist University.

The module Theories of Translation and Interpreting has four units: an overview by Professor Theo Hermans; a unit on descriptive approaches by Siobhan Brownlie; a unit on interventionist approaches to translation by Sebnem Susam-Saraeva; and a unit by Sameh Hanna on translation as social practice.

The course has no formal teaching, no charge, no sign-up dates. The materials are presented as is, for self-study.

Posted by sunny south coast at 07:02 No comments: