Following on a very interesting paper by Rachel Weissbrod at the Splendid Innovations conference in May 2015 at the British Academy, where Rachel talked about the beginnings of film translation in Mandatory Palestine, I have been reminded by Sam B. of this story by Israeli film producer Menahem Golan, from an interview in Cinema Scope: 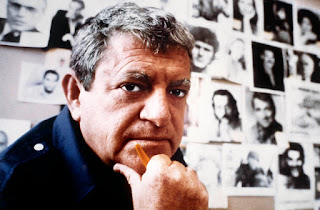 Cinema Scope: You became involved with movies as a child back in your Israeli hometown of Tiberias, when one of your first jobs was as a subtitle-turner.

Menahem Golan: At that time the subtitles were not on the film, but projected on the side. So you needed someone to turn the wheel. And already as a child I wanted to see every movie, but my father didn’t give me the money to go to the cinema three or four times a week. So I made a deal with the projectionist that I would turn the film subtitles for free, as long as I could see the movie. But it often happened that I got so caught up in the film that I forgot to turn the wheel. And the whole cinema would start yelling: “Menahem! Menahem! Subtitles!!!”

UPDATE 21 August 2015: I have just come across this account on Luke McKernan's excellent Picturegoing blog by the Palestianian author Khalid Totah (1886-1955) of going to see Olivier's Hamlet and another unnamed Hollywood film in Damascus, probably in the late 1940s. There's just a brief mention of the subtitles: 'of course the film was in English, but on the side there was an Arabic translation'. This would have been a bit later than Golan's account - Golan was born in 1929, so was probably turning subtitles in the early 1940s. If any readers know of other accounts of this subtitling-on-the-side in the Middle East I'd be very happy to hear about it.
Posted by sunny south coast at 15:20 No comments:

"Sub-titles inept, sub-titles abominable": a Russian film in the UK, 1935

I made a long-awaited trip back to Southsea this weekend and popped in to my favourite bookshop in the world, Adelphi Books on Albert Road, where I acquired (among other trifles) some 1930s issues of Sight and Sound. The autumn 1935 issue contains a review by Arthur Vesselo of Petersburg Nights (Roshal & Stroyeva, 1934) (referred to in the review as St. Petersburg, known in France as Les nuits de Saint-Pétersbourg). (I note that the film was nominated in the same year for the Mussolini Cup for Best Foreign Film at the Venice Film Festival, but otherwise seems to have had an undistinguished career.) 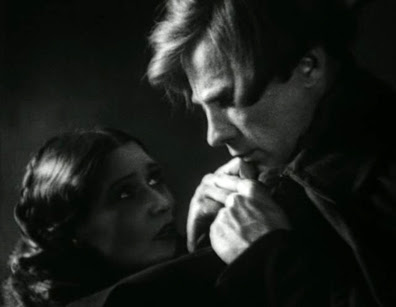 Vesselo isn't happy with the film, or the translation:


The film as a whole has little real solidity: its movements are feeble, its climaxes crude. The propagandist element lacks both purpose and subtlety, and the nineteenth-century setting is infinitely less convincing than the customary Russian treatment of present-day conditions. What virtue remains is ruthlessly massacred by the sub-titles.
This question of sub-titles needs long and deep consideration. They meet us at every turn: sub-titles misplaced, sub-titles mis-spelt, sub-titles inept, sub-titles abominable. They throw out the composition of shots, ruin their photographic quality, and break up their continuity - sometimes they seem to swamp the picture completely. (Sight and Sound 1935, vol. 4, no.15, p.124)

There were very competent subtitlers working in London in this period - Mai Harris, Julia Wolf - so one suspects that these abominable sub-titles may have been produced in the country of origin - well, we'll see, if a copy can be tracked down in the archive.

It's worth noting by the by that Vesselo doesn't seem a big fan of dubbing either: in the same section he reviews a Czech film, Volga in Flames, and complains that the dubbed English dialogue


was hardly a success. the lack of correspondence between words and mouth-movements can be ignored, but the vast unsuitability of Western tone and accent is another matter. Cossacks and Cockneys have little in common; and at moments of tension the formal intonation of the studio reduces the action to bathos. Choice of language also provides its problems. Wherever, in fact, the dialogue ceased for a space to be predominant, and the film was left to rely upon its original sounds, the story was lifted bodily to a higher sphere.

Interestingly,  Vesselo doesn't note that the film was in fact dubbed from French (thanks to Sam B. for pointing this out) as the film was a French-Czech co-production with Danielle Darrieux and Albert Préjean, also known as Volga en flammes: 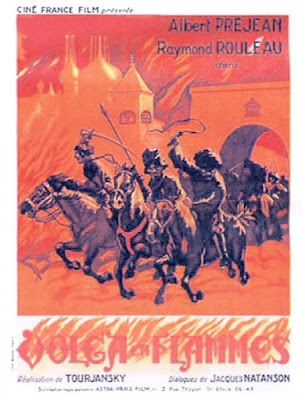 Posted by sunny south coast at 12:29 No comments: