The fate of a Japanese silent film in translation

I have one thing to say about this year's Pordenone Silent Film Festival.

It was my first visit (it's been a banner year for film festivals, what with the Slapstick Festival in Bristol, Il cinema ritrovato in Bologna, and then the first ever Cinema Rediscovered festival in Bristol) and I can't wait to go again.

I thought I would celebrate the brilliance that was this week by sharing a snippet of film translation history that I came across recently. It's a sordid story of silent film, translation, Ireland, criminal behaviour and flammable nitrate...

In researching the distribution of foreign films in Ireland (a task made more complicated because for much of the twentieth century 'foreign films' meant anything not made in Ireland) I came across a fascinating anecdote. On Thursday 21 September 1944 Dublin's Evening Herald newspaper reported on the theft of eight reels of 'the only English translation in the world of a foreign film, entitled "The 27 Martyrs of Japan". The case was heard at the Metropolitan Juvenile court, as the film had been stolen by a fourteen-year-old messenger boy: 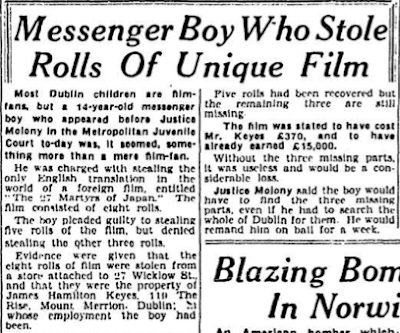 Five rolls of the film had been recovered by the time of this first court hearing, and three were still missing. The unnamed boy reappeared in court on 28 August 1944, at which point it was discovered that the missing rolls of film had met an unhappy fate:

The film was in fact The 26 Martyrs of Japan, which had had a long run in Ireland. As reportedly the first Catholic-themed film to be released in Japan, it was much trailed in the Irish press, and opened at the Savoy in Holy Week, 1937: 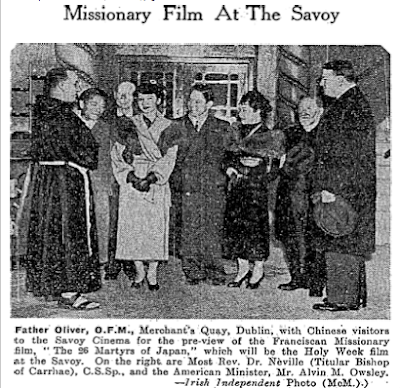 It's not clear to me yet what form the translation took (there was some talk of a lecturer alongside the film), and why the print was still in Ireland in 1944 - and indeed whether the remaining reels of that print survive somewhere - but the good news is that a version of the film did survive elsewhere and it's once again being screened.

Posted by sunny south coast at 14:41 No comments: 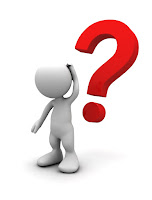 Hello gentle readers, I've been burrowing in Irish newspaper archives recently, for my own nefarious research purposes, and am a bit perplexed by something (well, more than one thing, but you know what I mean).

On 23 May 1948, Noel F. Moran, film critic of Ireland's Sunday Independent, reviewed an Anglo-French coproduction by the title Behind These Walls in his regular column 'This week's Films' (p.2). I'm unable to find any record of a film with this title, and as you will see below, he doesn't give any helpful information about actors, director etc., because he is too busy complaining about the dubbing.

I'm casting this one out to the 'verse, and would be very grateful if any readers or their acquaintances could shed any light on what the film might be. Here's what NFM says about the film:


The Anglo-French film "Behind These Walls" (Regal) is more notable as a technical experiment than as a story of the French Resistance Movement. It is, to my mind, an experiment that fails but, let me hasten to add, not on the technical side.
The background is French: the characters are French. By means of the De Lane Lea process of English speech recording (it is known as "Lingua Synchrone"), these characters are given English voices to speak the English dialogue. Technically, as I have already implied, the process is a success. The synchronisation is a definite advance on the old hit-and-miss methods of dubbing, utilised largely on the Continent and in America. But, what has happened to the atmosphere and the realism? They have gone with the wind.
At its best, the picture could never be regarded as another "Open City". It has not the same scope or stature, nor does it seek to give the same comprehensive survey of a great nation under the heel of the invader. Made with R.A.F. co-operation, it is a recreation of a true incident. A group of ordinary people face a tragically simple problem - whether or not to blow up a German benzine [sic] train and sacrifice the lives of 50 of their fellow countrymen, held as hostages. Emphasis is on the reactions of these hostages as they await their fate - the Mayor, outwardly calm but sick inside; the doctor; the old beggar, facing destiny philosophically; the spiv; the coward; all the unspectacular heroes and heroines of the back streets.
The characterisation has all the visual appeal and the sensitivity one has come to associate with the French cinema - all set at nought by those English voices, which make the film neither fish, flesh nor good red herring, to to speak. The cockney-like voice of the tramp, for instance, is described in the publicity sheet as "a forthright accent that drives home the essential provincialism of the French original hero of this dramatic part". My imagination is not sufficiently vivid to catch the analogy. Give me the original French version, with English sub-titles, however inadequate. When I go to see a French film, I want to see a French film. Running time: 1 hour, 32 minutes.


UPDATE later that evening: Warm thanks to Lucy M. and Sam B. who have solved the mystery. The film is Jericho, also known as Behind These Walls, directed by Henri Calef and released in 1946. There does appear to be some confusion about the title. The film was reviewed in the New York Times on 6 December under the title Jericho ("exultant drama in the truly fine, French tradition"). There is no mention of the translation but it seems more likely that it was the subtitled version since it played at the 55th St. Playhouse which showed a lot of subtitled imports. Jericho was also the French release title. It was reviewed twice in the Monthly Film Bulletin in the UK, on 1 January 1947 for the dubbed version under the title Behind These Walls, on 1 January 1948 for the English-subtitled version, under the title Derrière ces murs. The subtitles were referred to as 'adequate' and the dubbed version 'not too offensive'. 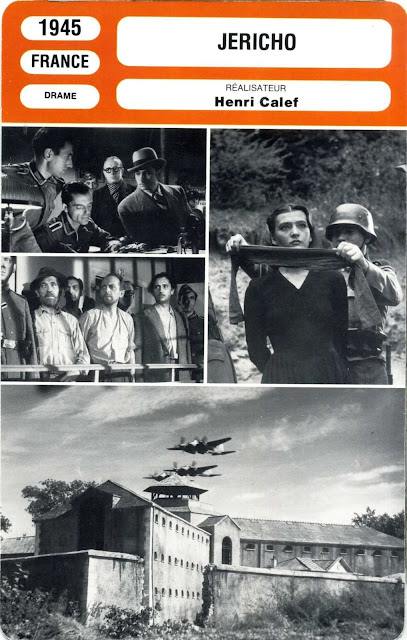