In honour of the Translation in Music conference which is taking place down the road in Cardiff this weekend, I thought it might be nice to have some song-related translation fun.

What popular English-language songs, most famously sung by which artists, are the originals (or indeed the translations) of the songs here? Answers in the comments please...

1) This one I had no idea about until I came across a link on Twitter:


2) It's the song that opens this interview clip:


3) This one is a perennial favourite:


6) With thanks to Ali O., who introduced me to Jack Lukeman and the Black Romantics:


If anyone wants to read any more about song translation, you could try this old but fun NPR programme. There's an article about the translation of Stevie Wonder's 'I just called to say I love you' in Meta on open access. There's another article in the same journal by Ronnie Apter about translating opera (link is to direct download). There are good articles by Peter Low and others in various paywalled journals. There's an AHRC-funded project on 'Translating Music' with a list of further reading here. There was a special issue of The Translator on translation and music in 2008 (paywalled). There's an interview with Jonathan Burton and Judi Palmer of the Royal Opera House, Covent Garden in the Journal of Specialised Translation here.

UPDATE: Thanks to Sam B. for pointing out this article by Nicolas Froeliger on translating Bob Dylan into French.
Posted by sunny south coast at 10:09 No comments:

What does it mean to 'translate' a film?

My friend @YosemiteBailey posted a nice link on Twitter recently to a debate that has sprung up about US audiences and subtitling. The article, by David Poland on MovieCityNews, was responding to two recent articles. One, by Scott Foundas in Variety, claims that US audiences are increasingly comfortable with subtitled films (practically a topos of movie journalism, by now):

The second is a rebuttal by Anthony Kaufman on Indiewire, who points out that grosses for subtitled films in the US are falling significantly:

Poland makes the point that it's difficult to say whether or not US audiences like subtitled films or not when (a) the stats being discussed don't reflect new broadcast/distribution pathways such as VOD and (b) so many of the indie arms of major studios have backed away from subtitled films in general, so audiences aren't even being given the chance to vote with their feet.

But what interested me most about Poland's article was one of the comments. Poster Gonzalo Jimenez points out that

He's of course quite right that subtitles are widely watched in many countries, and also that Spain is one of the countries where dubbed films are more usual, for lots of historical and commercial reasons (for more on this see Martine Danan's 1991 article which can be downloaded as a pdf here).

What's really interesting here is the contrast that's set up between the subtitling of films and their 'translation', i.e. dubbing. What could it be about dubbing which makes it somehow seem more like 'translation' of the whole film than subtitling does? Is it a linguistic issue? It's not the first time I've seen 'translation' of a film equated with dubbing. Maybe it's something that's characteristic of Spanish usage.

But it also pops up in the research literature. In 1960, Edmond Cary referred to dubbing as 'traduction totale', or 'total translation'. For him, dubbing epitomises translation because it combines elements of text translation (but with the added constraint of not being able to shorten and omit), translation to be spoken and theatrical translation, the specific issue of lipsynch, the problem of the multimodality of film and the matching of the vocal to the gestural. He concludes that dubbing is the summit of the pyramid of types of translation, because 'tous les autres genres ne connaissent qu'une des facettes du langage: le doublage accepte d'être fidèle à toutes' [all the other types [of translation] are only concerned with one aspect of language: dubbing commits to being faithful to all of them].

Cary exaggerates the differences between dubbing and other forms of translation - it's certainly not only dubbing that has to be acutely sensitive to the nuance and the connotative meaning of words - but then he is expressing his ideas in the critical language of the day. Fidelity was the point of reference.  Print literature was the main context in which translation was considered. It's therefore not surprising that audiovisual translation feels like something that has to be clearly differentiated from 'conventional' translation. But it's still interesting that one form of audiovisual translation might feel 'more like translation' than another. It's particularly intriguing because dubbing in some languages, including Italian, gets referred to as a 'reduction', as in this example from an Italian release of Mr Blandings Builds his Dream House (aka La casa dei nostri sogni): 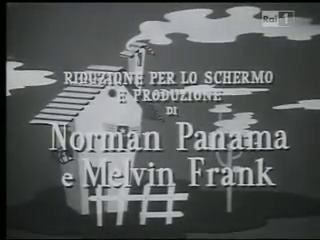 I think I feel another post coming on.
Posted by sunny south coast at 15:48 No comments: