We are delighted to welcome Professor Karin Littau of the University of Essex to give a research seminar on Thursday 3 December. Details below. All welcome. Refreshments after.

If film has productively transformed, even invigorated, literary practice, as recent research in film and literature has suggested, might this not also be the case with regard to literary translation? In what ways has film shaped the material and aesthetic practices of translation? What kinds of filmic techniques have been absorbed into poetry translations in book-form or for online e-translations? And, how are we to understand the allusions to film and film culture in translations based on originals that were composed before film was even invented? My aim in exploring these questions, is firstly to demonstrate that media shape minds or “mindsets” and secondly to show, through specific print and digital examples, how translation is affected by what Thomas Elsaesser has called the “cinema in our heads”.

Karin Littau is Professor of English and Comparative Literature at the University of Essex. She has published on book and film history, comparative media, translation, and reception studies. Her next book is a history of literature and film for Routledge, others include Theories of Reading: Books, Bodies and Bibliomania (2006) and most recently the co-edited volume Cinematicity in Media History (2013).

Posted by sunny south coast at 15:53 No comments:

I went to a splendid showing of Roberto Rossellini's 1945 film Roma, città aperta on Friday night, courtesy of the Italian Department at the University of Bristol and the InsideArts festival. We saw a restored print with English subtitles credited to the festival Il cinema ritrovato, where the restoration was done.


The film is certainly not the version scorned by one denizen of Netflix for its "Operetta germans, heroic priests, magazine-cover kids, forced conversation, bad (frequently missing!) subtitles, video quality low (all the scratches, blotches, and dark areas are here, just like you're watching the old film)" (one does wonder if the subtitles and the print quality had been better, would the viewer have found the Germans operettish, the conversation forced, etc.)

The subtitles on this version were good and often funny, with smart and unobtrusive solutions for many very Italian turns of phrase. It made me wonder about the first English subtitled version of this film in the US, which opened, according to David Forgacs, on 25 February 1946 at the World Theater on 49th St., and ran there for nearly two years. It had subtitles by Pietro di Donato and Herman Weinberg. Herman G. Weinberg worked as a subtitler and film critic from the early 1930s to the early 1970s and pioneered subtitling in the United States; more on him in a future post, perhaps.

Are di Donato and Weinberg guilty of perpetrating the "bad and frequently missing" subtitles mentioned above? Bosley Crowther in the New York Times doesn't comment. I wonder what the local newspaper files of newspapers.com may be able to tell us.

The Winnipeg Tribune of Friday 18 April, 1947 closes a long review by naming and praising the subtitlers:

In a slightly later review on Tuesday 17 June, 1947, the Sandusky Register in Sandusky, Ohio, comments that

We do, however, get a hint in the Winnipeg Tribune review that these subtitles might have been the rather selective subtitles which were typical of the period. And lo, the Gazette and Daily, of York, Pennsylvania, on 11 February 1947 indeed had some reservations about the completeness of the subtitles: 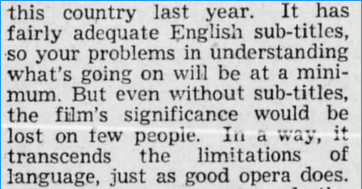 The subtitles must have really been quite bad to trigger this return to the 'transcending the limitations of language' shtick, so prevalent fifteen years previously. It looks likely that these subtitles may indeed be the ones referred to so bitterly by the disenchanted Netflixer above.

Interestingly, subtitles still seem to have been rather strange to a proportion of the film-going audience, or why does the Daily Times-News of Burlington, NC have to explain, on 12 July 1947, what subtitles are?: 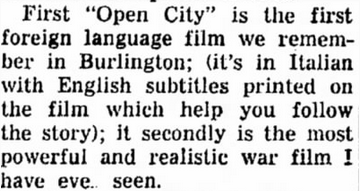 But the award for the most comprehensive comment on the film's translation (or at least the most comprehensive that a evening's energetic keyword searching could provide) must go to a columnist on the Daily Tar Heel, student newspaper at the University of North Carolina at Chapel Hill, who has this to say on May Day 1947 (I give it in extenso, so that you get the full flavour): 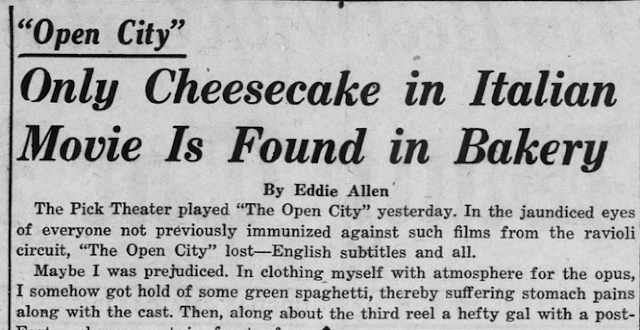 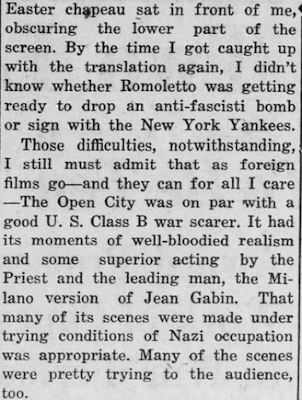 Mr Allen expends much of his creative energies on describing the subtitles: 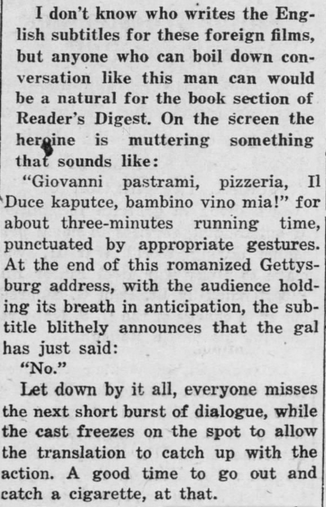 Setting aside the author's unendearing linguistic shtick, this review gives us a rather clearer picture of how selective Mr Weinberg's and signor di Donato's subtitles really were. It offers an intriguing research line to follow. How much was this viewer exaggerating the selectiveness of the subtitling? To what extent were other reviewers just grinning and bearing it - or, indeed, so riveted by the film's acting and storyline that they did not fully notice the subtitles? Only a close comparison against a copy of this version of the film can begin to tell us.

It becomes clear in the closing paragraphs of the review that Mr Allen's disappointment in Open City stemmed from the mismatch between the advertising and the product:

This seems to have been the kind of advertising that Allen was talking about: 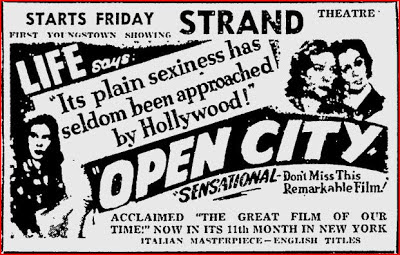 Tino Balio's informative book The Foreign Film Renaissance on American Screens 1946-1973 has much to say about the way this film was marketed:


Realizing it would take time to cultivate an audience for foreign films, [the distributor, Joseph] Burstyn used venerable exploitation techniques to attract attention. [...] Although the New York Board of Censors passed the film "with but insignificant scissorings", according to Variety, Mayer-Burstyn decided to bypass the Production Code Administration (PCA) to avoid having to make further cuts. The same article continued: "Its got plenty to make [Hollywood censors] blanch if and when it is shown them. Principal sympathetic femme character speaks openly of her pregnancy, although she's not wed, and the traitoress who leads to the capture and death of the partisans betrays them for a combination of cocaine and the love of a lesbo German spy. That's just a sample of the angles for the PCA to mull, while the handling of the priest will no doubt make the Legion of Decency gulp hard, although the film has been okayed by the Vatican." Unlike the Vatican, the Legion of Decency found much to fault in the film and gave it a condemned rating. Lacking the Production Code seal and the C rating meant that Open City would not be booked by the major theater chains.

The Mayer-Burstyn partnership made the best of circumstances. First, it released Roma, città aperta, the original title of the film, as Open City. The original referred to Rome's protected status during the war as a historical city. Burstyn's title suggests something quite different - a wide-open city where anything goes. In line with this title change, Mayer-Burstyn promoted the film as "Sexier than Hollywood ever dared to be!" and ran ads with fake publicity stills, one showing "two young ladies deeply engrossed in a rapt embrace" and another of "a man being flogged", both of where were "designed to tap the sadist trade", according to Mayer. As Variety explained, two types of audiences existed for foreign films: the "fairly discriminating filmgoers", who were taken with the "raw, unvarnished approach to sex" in the films, and the "transients, the misfits...and the loose-jawed brethren" who normally got their thrills vicariously from exploitation films". At first Open City played in art houses and independent theaters. Mayer-Burstyn later toned down the torture scenes and removed an offending shot of a toddler on a potty to secure a coveted code seal and entrée to mainstream theaters. (pp.41-42)

There's much to mull over here, including the existence of multiple cuts of the film, and the questions that remain over which version of the film a given audience might have seen. I like very much Samuel Wilson's comment, in his review of Balio's book and the film, that the Burstyn-Mayer release is an important version (or, I guess, versions) in its own right, which deserved to be given greater prominence in the Criterion edition. In the same vein, I would argue that di Donato and Weinberg's subtitles, patchy as they were, are also a significant factor in the film's reception in the United States, and deserve to be represented, even in the form of a clip for purposes of comparison, on a future DVD.

N.B. Post updated after publication to reflect the fact that di Donato and Weinberg's subtitles seem to be available in all their patchiness and elegance of typeface, on the TCM website: 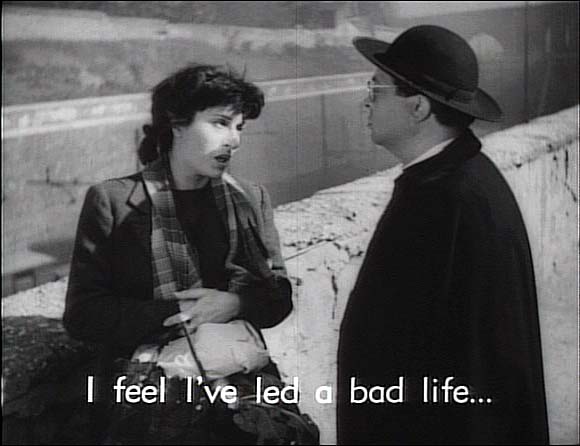 Post-post-scriptum: Updated once again on finding out from colleague and Italian film scholar Catherine O'Rawe that Pietro di Donato was in fact a somewhat well-known literary figure. There is an essay by Loredana Polezzi about his novel Christ in Concrete here.
Posted by sunny south coast at 12:42 No comments:

The return of the translating dissolve

In my book Translating Popular Film I talked about the device of the 'translating dissolve' which was so common in the 1920s and 1930s. Here's an example from the wonderful Frank Capra film The Bitter Tea of General Yen (1933), with the wonderful Nils Asther in far-from-wonderful yellowface as the eponymous general:

The translating dissolve is also described by David Cairns on his excellent 'Shadowplay' blog, and at more length by R. John Williams in a very interesting and lavishly illustrated article from 2009, 'Global English Ideography and the Dissolve Translation in Hollywood Film'. Cairns uses the example of Daughter of the Dragon (Corrigan, 1931). In my book I argued that the 'translating dissolve' represented a kind of perceptual 'point of view' shot where the viewer gets to see from the point of view of a character who understands the source language:

Odd it may have been, but it was a standard way of making foreign-language written texts 'processable' for American viewers and thus contributed in an important way to linguistic realism in film.

I came across another interesting example this evening leafing through Daisuke Miyao's book Sessue Hayakawa: Silent Cinema and Transnational Stardom, where a translating dissolve from the film The Typhoon (Barker, 1914) proves to be more than it seems (the relevant bit starts at the bottom of page 70):


This underlines how long-lived this particular device was; from the 1910s to the 1930s and beyond. It also made me wonder how early this device was used. I'd be delighted to hear from any readers with earlier examples, or with examples later than the 1930s.
Posted by sunny south coast at 16:28 No comments:

It's that time of year again. 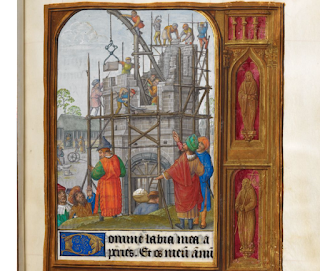 The School of Modern Languages at Bristol comprises the departments of French, German, Italian, Hispanic, Portuguese and Latin American Studies, and Russian and Czech, and a cross-departmental Translation Studies section. We also offer supervision for projects with Persian, Arabic and Georgian.
Applications can be made to the DTP from 30 November 2015.  The closing date for applications is 11 January 2016. Details of the application timetable are available at http://www.sww-ahdtp.ac.uk/apply-for-a-studentship/.

If you are planning an application for doctoral research in Translation Studies at the University of Bristol, please contact Dr Carol O'Sullivan. Enquiries relating to projects on theatre and performance should be addressed to Dr Katja Krebs in the School of Arts. You can find more details of individual research specialisms in translation at Bristol at http://www.bristol.ac.uk/study/postgraduate/2016/arts/phd-translation/.

For updated details of doctoral research funding opportunities at the University of Bristol, keep an eye on http://www.bristol.ac.uk/arts/gradschool/funding.
Posted by sunny south coast at 03:46 No comments: